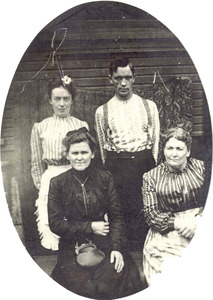 The Speer family were really “Johnnie come lately’s” to Forestville. They didn’t move there until about 1908. They came to California after the 1906 earthquake, to help rebuild, James Forest Speer Sr. being an engineer, having built several bridges and buildings back in Pennsylvania, in the Beaver Co., and Pittsburgh areas.

He had been born in Pittsburgh on Nov. 9th, 1877, and according to the 1880 census he had a sister Stella who was several years older,(who died of rabies as a teenager) and his mother was then a widow. Her maiden name had been Messick and shortly thereafter she remarried to a Frank Weidner and had more children. I have pictures of them and I’m amazed at how much I look like this great grandmother!

On the 20th of Sept. in 1901 he married Lucy Maude Powell in Pittsburgh, the picture showing the two of them with their mothers is believed to have been taken at their wedding reception. She had been named for her maternal grandmother, Lucy Caroline Hendrickson/Coulter, but Gram didn’t like the name Lucy and always went by her middle name of Maude, it was a surprise to me to find that her real first name had been Lucy.

They lived there in the same area where her ancestors had come and settled over one hundred years before, as pioneers, one even being the son of a Seneca Indian woman whose people had been there for thousands of years. Their first two sons, James Jr., and Howard Speer were both born there, as well.

They came to California in 1907, living first in San Francisco, and there are many postcards still, from family back in Pennsylvania, sent to them in the early years. I was priveleged to meet some of the children of my Grandpa’s half sister, Lucinda Weidner Howard, in Ohio, when I first was studing their genealogy. They too had postcards still, that my Grandparents had sent them from California.

One of those postcards sent in February of 1910 told that Grandpa had just bought a horse for the farm, there is a picture of him, Grandma and the three boys, with this new horse in front of the barn, which looks brand new in this picture, and probably was. Most all of older Forestvillians will remember that old barn that stood across the street from the Sunny Slope Rest home there on Mirabel road, before the Speer ranch subdivision went in. So this postcard dates the picture, my father, Paul Speer, who was born there at the ranch , 19 April 1909, looks about 10 or 11 months old, so this confirms it. The census, taken later that summer, listed my father’s name as “baby” Speer, as they hadn’t thought of a name for him yet.

Bertha, the last child, was born a few years later. The children went to Forestville school, there is a picture of the school taken about 1911 with James Jr. sitting in the front row. They moved to Lake County for a few years when James Jr. attended high school.

Maude raised the children pretty much by herself. When James Sr. was working close enough, such as in the bay area, he would come home on weekends. One of the stories that both my father Paul Speer and Aunt Bertha told me was that Grandpa would ride the electric train home to Forestville on Friday nights and play cards the rest of the night at the hotel where there was usually a hot poker game to be found. Then he would go home Saturday morning, Grandma never knew he actually arrived on Fridays!

There are postcards too that Grandpa sent to Grandma to let her know how they were doing when he was working in Northern California or wherever he considered it too far to go home from. So she pretty much raised those four children by herself.

Later, when Grandpa quit building things because of his paralysis, he worked the ranch. They’d planted apple trees, and he and his oldest son Jim took care of several other orchards there in the Forestville area too.

I always remembered Grandpa with crutches, he dragged one foot like the monsters in the movies. And he was big and brusk in manner, which had most of us grandchildren scared to death of him! He seemed to like that he scared us all. My father made me kiss him when I was little, I was allowed to run away afterwards, but I had to kiss him. He’d get all indignant and ask what I did that for, but I noticed even as a smaller child that he really liked it, but he didn’t want anyone to know he did. So I had his number from very early on, and continued kissing him, even as a teenager.

Grandma was tiny, probably only saw 100 pounds when she was pregnant! She had one habit I never liked, when she was picqued at you, she would pinch your bottom sooo hard! My favorite thing was when she baked bread! You could smell that great homemade bread baking half-way to our house. And it was so delicious!!!

She had an old butter churn that she still used, I still remember the day she taught me to churn the butter in it. I just couldn’t believe my eyes because when we were done it was butter, and it had just been heavy cream when we started! And it was so good on her bread! At our house we usually had margerine, it was white and then there was a thing of orange color that you squeezed into it and kept mushing it around until it was all yellow and looked like butter, but it never tasted like Gramma’s butter! That was in the 1940’s.

In 1951 they celebrated their 50th wedding anniversary, we actually used the parlor too, which you were usually not allowed to go into, it was one of my favorite places, and I would feel so special when Gramma would let me go into that special room. The radio was out in the regular family room, which had french doors that opened into the parlor. When we would listen to the radio, we would sit and watch it, very much like we would watch TV a few years later. All four of their children were there for their anniversary, and each of them had had two children too, so there were eight of us.

All three of their sons lived there in Forestville, Bertha being the only one who had left. She had married Delbert Fallon, whose family was very oldtime Forestville, and they had moved to Nevada, but she would bring her two daughters, Cheryl and Karyn, down sometimes during the spring vacation and at the end of every summer for “at” least two weeks of whirlwind fun for the rest of us kids! I always looked foreward to it!

Grandpa had lots of different properties there in Forestville, including what is now known as Speer’s market. I have a picture of it in the early 1930’s, when it was mainly a gas station with a small store. James Speer Jr lived there for several years with his family and ran the store, my father, Paul Speer Sr was working at the gas station the night he met my mother, she had come to Forestville to dance on the wonderful springboard floor they had then, in town. Uncle Howard purchased the corner from Grandpa after WWII, I still remember when it was mainly a gas station. I remember when they enlarged the store and had the bar, and supposedly they had the best poker games in Sonoma Co.

Grandpa passed on in Dec of 1956, Grandma lived in the old house for a few years afterwards, until she moved across the street to the resthome. Mrs. McKenna had always told my Gramma that she was going to build a resthome to take care of her when she got too old to take care of herself, and she did. Gram died there in August of 1964. She had had harding of the arteries for years, which had affected her memory for a long time, she didn’t know who any of us were most of the time. But she still enjoyed her yardwork and going to the Methodist Church, and she never forgot how to give you a good hard pinch!