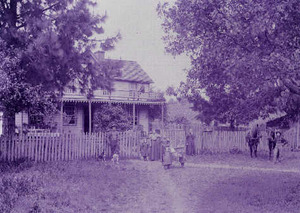 An Evans Looks Back

For a 74 year old man living in the high desert to be writing about Forestville may seem a little ludicrous, especially when I moved away in 1935 at the age of 10.

In the eight years of elementary school I went to no less than five different schools from northern California to the southern part of the state. I can’t tell you why but Forestville has always held a special place in my heart. It has always been “My Hometown”.

The family of Edward R. and Sarah E. Evans first moved to Forestville in 1893 after homesteading in Nebraska and living in everything from a “dugout” to a sod house and finally a frame house.

In 1899 they left Forestville for a period of about a year in Iowa. My uncle Ernest Evans was born during that short time in Iowa.

In 1900 they moved back to Forestville and bought the ranch we always referred to as the ‘Evans Place”. I understand it is now known as the “Crenela Place”. I believe some type of open space and a golf course is planned for that area now.

I believe in 1899 the children had moved out of the old Harbine School into the new Forestville Grammar School and in 1900 or shortly thereafter my grandfather acquired the lumber from the old school to build a barn. My cousin Audrie (Evans) Arthur and I can both remember the school lettering on the boards. They were never painted. Their last child Helen was born while they lived here.

My grandfather’s sister Rachael was married to John Ewing and his sister Mary Jane was married to Lewis Cass Close. My Grandmother Sarah (Givens) Evans’ brother John Melville Givens also lived in Forestville and is buried in the Forestview cemetery as are several of the Evans family including my Greatgrandmother Virginia (Evans) Vestle. My aunt Helen married Ellis Ross and my cousin Audrie Evans married Kenneth Arthur so the Evans family is related to at least these Forestville families and probably several more by now.

I know my mother went to the Forestville grammar school as did, I’m sure, most if not all of her brothers and sisters as well as many of their offspring. My Brothers, Archie, Glade and I all went there as did, I believe, my sister Ruby Lee (Evans) Deter. Ruby attended Pacific Christian Academy in Graton for a time and she and my brother Archie both graduated from Analy High in Sebastapol.

One thing I remember is all the students and the teachers gathering around the flagpole in front of the school for the flag salute. You don’t see that much anymore.

I still remember walking to school in 1934 and making the turn toward the school and all there was left was a fireplace and chimney still standing. Oh yes, I believe the old outdoor privy survived the fire also.

All eight grades then had to go to school in the auditorium of the Methodist church. We moved away before I ever got to attend the new school. My younger brother Gordon was born in 1935 just before we moved away.

The Evans/Mc Gowen clan attended church in the little Church of Christ building. In 1998 they celebrated their 125 year anniversary. I was there for that occasion and was glad to see that they too, had installed indoor plumbing. A plaque was presented to the church by Pepperdine University and I was very proud that my Grandfather E.R. Evans was listed as one of the early leaders.

My cousin Jim Evans owned a garage in downtown Forestville. As I remember it was at the bottom of the hill just as you start to go up again toward the Evans/Crenela place. Jim’s wife was Minnie and their daughter was Zola. Jim and Zola both attended Forestville school.

My parents Archie and Ruby Mc Gowen bought a 90 acre farm out on Anderson Road. It had gravenstein apples and pasture plus a 2 story house, a barn, chicken house and a well. They paid $4500.00 dollars for it and during those times of red ink and depression lost it to the bank as many others did in those years. By the time the Association subtracted the costs of picking etc. the farmers owed more than they were paid for their crop. Besides Dad working so hard on the farm he also worked for Ketterlin Bros. Hardware in Santa Rosa.

I can remember my Dad and brothers sawing and splitting oak wood and Dad and Mom taking it to Santa Rosa where they sold it for $9.00 a cord. They really brought home a load of groceries for that $9.00. When I was there in Sept. 1998 it looked like someone was grading part of the property for homesites. I imagine the prices have gone up a little.

Up on top of our hill there was a patch of cactus all planted in perfect rows. I think it was for some type of experiment for cattle feed or something. I know Luther Burbank did some work along those lines but I doubt he had anything to do with this patch.

One time when my brother and I were home alone we decided to build a fire in the pot bellied stove to warm things up a little. We loaded it with manzanita wood and it warmed up “A Lot”. The old stove got red hot and we started pouring water on it, in it and around it. We were scared! It’s a wonder we didn’t burn the house down.

As an example of being “in the country” one time my brother and I were rough housing and he fell and dislocated his elbow. Mom and Dad had to take him in the pickup truck clear to Santa Rosa to get it set.

“Those were the best of times—Those were the worst of times” Besides the apples and grapes most everyone knows about there were a lot of prunes grown in the area as well as hops used in the manufacture of beer. I remember many hop barns along the Russian river.

When my parents took me to Santa Rosa they would stop at Handy’s corner so I could see the bear and the Monkey and the little chipmunk they had in a cage with a wheel. My mother’s favorite place to eat was Louis’ Italian Restaurant. She always ordered “Crab Louis”. I think it is a family restaurant now featuring apple pie. I guess one of my favorite places to go was to visit my Aunt Dell in Healdsburg. She owned a Reed and Bell rootbeer stand. Boy, did I enjoy that unlimited supply.

In those days the church ladies would get together for “quilting bees”. My mother at one time had an old Star Touring Sedan. (Side curtains and all) This car had to be choked while it was being cranked. I was too small to pull out the wire choke by myself so Mom would pull it out, then I would put my finger in the loop and hold it out while she ran around in front and cranked. We would go to Maude Bacon’s house in Graton for the quilting bee and Mom would park facing down hill so it would roll and start without cranking. I think that was pretty much an every Thursday thing.

I could go on and on but I better cut it off. I just wonder how many people remember the man coming with the old car selling Olives and Hominy.

I want to thank the Forestville Historical Society for letting an old guy ramble on.

You can tell I have many fond memories and am very proud of “Forestville, My Hometown”.