Skip to content
History of the Forestville Church of Christ 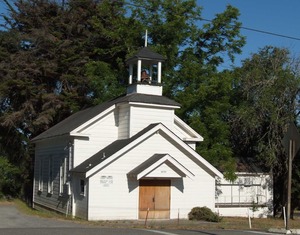 History of the Forestville Church of Christ

I am trying to write a little of the history of the Forestville Church of Christ as I know it. My knowledge comes mainly from three sources. One source being from early history that has been compiled by church historians such as Dr. Jerry Rushford, Professor of church history at Pepperdine University.

Another welcome source was present day Elders Ross Yeager and Noble Rogers and past Elder Matthew Smith as well as long time members who are still worshiping in the historic house of God. My most precious source would be the memories of my early days there and the history and loving stories told me by my mother,(an Evans) who was born while her parents were members there in 1895.

I was fortunate enough to be able to attend the 125th year celebration Sunday Sept. 27,1998. As I went through the front door that day and after meeting several fellow Christians I took my seat and began to look around. I hadn’t been inside the building since 1935 and yet I felt right at home.

The old bell rope was still there and the kerosene lamps were still on the walls with wicks all set to light. Oh, there were a couple of changes. Classrooms have been added as has indoor plumbing. I understand this was done about 1937. I couldn’t help but think of early family members and church pioneers I’ve heard about all these years.

The Forestville Church of Christ had its’ beginning in 1873 in the old Harbine Grammar School. By the summer of 1879 the need was evident for a building of their own. Land for the building was donated by George and Mary Schaumberg and Uriah and Sarah Covey donated lumber cut from California redwood trees.

The church met in its’ new building for the first time on July 22,1879. From that early date until present day the Church of Christ has never missed a Sunday in this durable meeting house. No congregation of the Church of Christ in the western United States can match Forestville’s record of never missing a Sunday assembly for 126 years. (As of Sept. 1999) In addition, the Forestville meetinghouse is the oldest church building still in regular use among Churches of Christ in western America.

In that period of time around 1904 the Forestville congregation was the largest and strongest Church of Christ congregation in the state of California.

However Forestville lost some of it’s numerical strength when it started new congregations in Graton and Santa Rosa.

By 1910, the Sichel Street Church of Christ in Los Angeles had supplanted Forestville as the largest congregation in the state, but Forestville continued to be a magnet for preachers traveling in the northern counties of California. G. W. Winter was a well known preacher/farmer who served this congregation for nearly 40 years. He joined the congregation in 1890 and died in January of 1929 and is buried in the Forestville cemetery.

Ross Yeager has never known any other church. His family for two generations before him were members of the Forestville Church, and he was brought into the meetinghouse for the first time in April of 1915. Matthew Smith and Noble Rogers both trace their involvement with the Forestville Church back to 1927.

The town of Forestville can be justly proud of this historic old building.