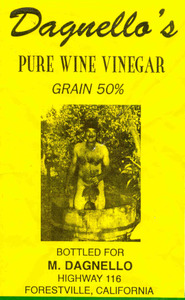 First Published: 1995
The passing of a wonderful era
If the good Lord picks flowers from his garden, he took one of the best when Forestville resident Mondo Dagnello passed away this past month.

A delightful man known for his distinctive black derby and sparkling smile, Mondo quite simply loved life. His cheerful presence was welcomed by the entire community and everyone feels a sense of loss at not being able to wave hello to him as he walks up our main street.

Born on May 17, 1916 at Cosmo Heights (the mountain just north of Hacienda), Mondo was one of 13 children. He attended the old one room Mountain View School at the corner of Green Valley and Highway 116.

Mondo and his siblings accounted for a good portion of the student body back in the 1920’s. He ran a trap line in the hills when he was a youngster and always he asked the teacher to ring the school bell “real loud” so he’d know when it was time to come back from checking traps and start school.

Mondo grew up at the “Home Ranch” in Pocket Canyon that had been built by his father, Geralmo. Back in those days you did everything to survive and Geralmo was once caught by the local revenuer for bootlegging. Geralmo told him, “Fine, take me in, but you feed my 13 children.”

The revenuer promptly released him. Mondo’s father died when he was young, so a good portion of responsibility fell to the younger members of the family. After finishing elementary school, he went to work as a timber faller for local logging companies. He also worked splitting redwood into rails and shakes.

Some of the shake roofs still existing in the canyon are from the result of Mondo’s early craftsmanship. His skills soon expanded to include an expert knowledge of grape vine and apple tree pruning. In the age before a large influx of migrant workers, Mondo was in constant demand by growers like Martini and Prati and the Ruffinos.

Old timers tell stories that it would take 3 or 4 workers to duplicate the same amount of pruning that Mondo could complete in a day.

With his brothers, he helped build the old cement block Santa Nella Winery off of Highway 116 and went on to become the winemaker there. Mondo also owned a team of draft horses and was quite adept at working the land.

His close kinship to the soil would soon lead him to yet another career of growing vegetables and fruits, selling them from both a truck and roadside stand. He operated Dagnello’s Shady Rest Store in Pocket Canyon and later owned a tavern called the Dagnello Club (across from the Santa Nella Winery).

At the store he was known for freezing homemade cider into popsicles, and his place became a favorite stop for travelers on their way to Guerneville. This was back in the days when the canyon had a number of small gas stations, stores and taverns.

Mondo also became equally well known for his distinctive chapeaus, wearing a dapper black top hat to numerous community events. No one knows for sure, but judging by family photos he seems to have traded the top hat for his better known black derby sometime in the 1950’s.

Mondo and his brothers also manned what was affectionately known as the Dagnello Fire Department in the canyon. It consisted of a Model A Fire Truck and an old shed to house the truck. When Virgil Fracheschi’s Alaska Inn (near the intersection of Green Valley and 116) started to burn down one afternoon, Mondo raced home to get the fire truck and it wouldn’t start.

So Mondo hitched the fire truck to his vehicle and towed it to the fire. When he got there he couldn’t get the fire truck’s water pump started either, so he was forced to watch Virgil’s bar burn to the ground. He had done his best, but it was just one of those days in the fire business.

Picking mushrooms and plucking abalone were two of Mondo’s favorite pastimes. For many years he was known as Forestville’s Abalone King because of his ability to find so many of the big salt water mollusks.

He was married 3 times (the first two didn’t last long as the gals just didn’t care much for country life). His third marriage was the charm when he met Lillian. They shared many fun-filled years together until her passing.

A project that Mondo and Lillian took great delight in, was Dagnello’s Pure Wine Vinegar Company. This venture lofted Mondo to legendary status in the West County and earned him acclaim throughout California. It wasn’t the quality of the vinegar everybody talked about so much…it was the vinegar’s label.

In a stroke of marketing genius, Mondo designed a label that literally caught everyone’s eye. It featured him, completely naked, except for his trademark derby hat and a well placed fig leaf. He struck a jaunty pose in a wine barrel crushing grapes for his special brew. Everybody had to have a bottle of that vinegar, even if it was only to display it on their counter.

Mondo’s produce truck, his grocery store and bar, and the vinegar, they were all such wonderful reminders of our heritage. “He really brought us a different era,” said close friend Gary Harris. “He was such a survivor and such a symbol of local history.”

Whether it was his derby hat, or sparkling smile, or his warm handshake at Italian American dances, most everyone in Forestville has a memory of Mondo that they will always cherish. His family has requested that any donations in his name be made to your favorite charity. Mondo himself would probably be happiest if he is remembered fondly whenever a good glass of Chianti is raised.

So Mondo, from all of your friends in Forestville who loved you…here’s to you and a wonderful life well lived.