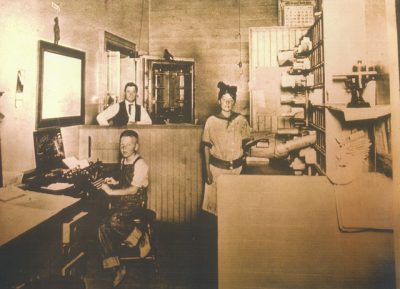 My Grandfather, Henry Silk, was a half-brother to “Silk & Son.” My Great-Grandfather apparently stowed away from Frankfurt, Germany sometime in the 1800’s. He came to Oakland where (according to my father) he was a stone mason.

Our family name was originally Shelk, or Selk, or something like that. The name was “americanized” out of fear that my Great-Grandfather would be sent back to Germany if he was found. My Great-Grandfather moved to Sonoma county in 1883 when he bought 90 acres on what was to become Silk Road in Windsor.

You can find the parcel on the 1897 Sonoma County Atlas. Stone masonry apparently paid quite well as he paid $4,500 for the 90 acres. Yes, Sonoma County was just as expensive 120 years ago.

Silk & Son was a combination merchantile and a bank. It’s not clear if “Silk & Son” was a joint venture between my Great-Grandfather and the half-brother, or the Half Brother and his son. My dad seems to think it was the latter case. My dad said that my Great-grandfather established “Silk & Son” because he gave my Grandfather the ranch. My dad also said the “& son” prefered city life and in later years moved to San Francisco. He managed one of the big hotels the San Francisco, and later moved to New York City where he managed hotels there. I hear he was quite successful. My dad said he had no children.

The Silk family has the family plot at the Shiloh cemetary in Windsor. I believe my Great-Grandfather is buried there, as is my Grandfather. My Dad is still alive and kicking at 94 years old. The plot is located on the north-west corner of the cemetary. You can’t miss the big “Silk” headstone.