More than 100 residents came to the Forestville Planning Associations January Town Meeting to learn the current status of the issues facing Forestville and to learn how they, as concerned community citizens can influence those issues. Half of the meeting was devoted to the Low Flow proposal for the Russian River covered elsewhere in this issue of the Gazette. Here is a summary of Forestville’s current development projects.

Update
The first hour of the Town Meeting focused on the future developments facing Forestville and how local residents can influence those decisions. The updated issues covered at our Town Meeting are the status of the EIRs for the quarry expansions, Burbank Housing development (Meadowlark), a new housing development across from Speers market (Woodstone), the Crinella property development, the proposed bypass, a requested carwash next to Sequoia Realty, and the Low Flow issue. Supervisor Mike Reilly, Chaney Delaire, Senior Project Manager with Burbank Housing Development Corporation and Harvey Chernofsky, developer of the Woodstone housing development contributed to those updates.

Process for community input
The EIR is currently expected in March with a minimum of 30 days to respond. There will be one public hearing scheduled with the Planning Commission. Written feedback is considered valuable. A recommendation from the Planning Commission goes to the Board of Supervisors. The Supervisors will hold public meeting for input to the whole review package. The ultimate decision lies with Board of Supervisors.

Burbank Housing
An affordable housing development has been approved for Forestville. An article on this development was printed in the Gazette and can be found on our website www.forestvillefpa.org. At a Feb. 3 meeting, the Board of Supervisors approved the general plan amendment, zoning change and major subdivision and design review for 30 attached and detached single family dwellings on a 5-0 vote. Burbank is hoping to break ground on this project this summer with the first home completed in late 2005. For more information or applications you can call 526-9782. We encourage Forestville residents interested in buying one of these homes to be first in line.

Woodstone Development
This housing development for 7 “mid-priced” single family dwellings, 2 “affordable” attached homes, and two over- garage granny units are proposed for the lot just Northwest of Speers Market, at the corner of Mirabel at Trenton Road. To be approved, this development will require a General Plan Amendment with at least 2 public hearings and a full drainage review by the Planning and Resource Management Department, as the property is bordered by a ditch that drains directly into the river.

Crinella Property Development
The Crinellas have created a partnership with Orin Theissen to develop their property. The new plans are a somewhat scaled down and modified version of what Orin has done in Windsor. He is planning a real town square surrounded by historical styled two story buildings; shops with living quarters above. PRMD is waiting for modifications of their current application. Once the modifications are submitted, the application review normally takes about 60 days. That will be followed by a Project Study Plan. The needed studies will be determined and there will be a public input process for some studies. The FPA has invited Orin to be a part of our next Town Meeting on Town Planning.

Proposed Bypass
This project is currently on hold while studies are being done and financing remains obscure. If the project is approved, PRMD will make recommendations to the Board of Supervisors, who will make the ultimate decision.

Downtown Planning
The FPA organized as a proactive planning organization, understanding that the most effective way of influencing our future is by getting ahead of the game through planning. David Carpenter, Board member and Architect, has volunteered to be the new chairperson of our Downtown Planning Committee. If you are interested in being a part of this process, contact David: Home – 887-7432, Work – 569-5172, E-mail: djcarpenter@neteze.com

To voice your views through our survey, go to: survey. You can also get and give information by calling the Board of Supervisors at 565-2241 or Permit and Resource management (PRMD) 565-1900. As the voice of Forestville, the FPA encourages your input on any and all of these issues so that we can accurately represent our community.

An Elected Voice
In September, 2002, over 130 Forestville residents united on the principle that decisions affecting Forestville must be made with the involvement of the community and the consent of the citizens. The Forestville Planning Association was formed to insure a process for that to happen through town-wide meetings, small-group workshops, committees, and extensive public discussion. It was decided that this process must be led by a Board of Directors that was elected by the community and that all community members must be eligible to vote. On Saturday, January 24, 2004, Forestville residents took responsibility for their future by electing their first Board of Directors. Another article in this issue introduces our new Board members.

A Tribute to Our Past Board and Mary Luttrell
Also at the September 2002 meeting, participants created a vision for Forestville. Over the past 14 months, a committed group of volunteers have carried the work of monitoring proposed growth and development for Forestville and developing the FPA in order to manifest that vision. Everyone has worked hard and made tremendous contributions. Many of the most dedicated volunteers are now elected members to the new Board of Directors. However, there is one person who has played a significant role and has sadly chosen not to run in order to devote her skills to starting a local organization focused on Spirit in the Work Place. I would like to recognize Mary Luttrell, who has been Chairperson for the Communications Committee. My words can not do justice to Mary’s focus, skills and energy that she has brought to this committee and organization. She has coalesced and directed an amazing group of people and led them to the following accomplishments.

They have created a beautiful logo (thanks Jody) and great tagline “Caring for our community’s future.” They have designed, printed, and distributed an FPA brochure. They educate the community with regular articles in the Gazette (that would be me and Vesta) and a great website (Thanks Janet). They help plan and execute the Town Meetings, get signs up and get the word out (Thanks Lucy) and make video recordings of our meetings (Thanks Patti). Birgit has collected a documented history of our beginnings, in a scrapbook with photos (Thanks Birgit). They have managed a successful elections process (Thanks Elizabeth) and have conducted a community survey on the issues (Thanks, Anne). But most of all, thank you Mary, for being our fearless and wonderful leader. You kept us focused, made sure tasks were completed, made sure that information was flowing to and from the people of Forestville, and made it fun. You will be missed. 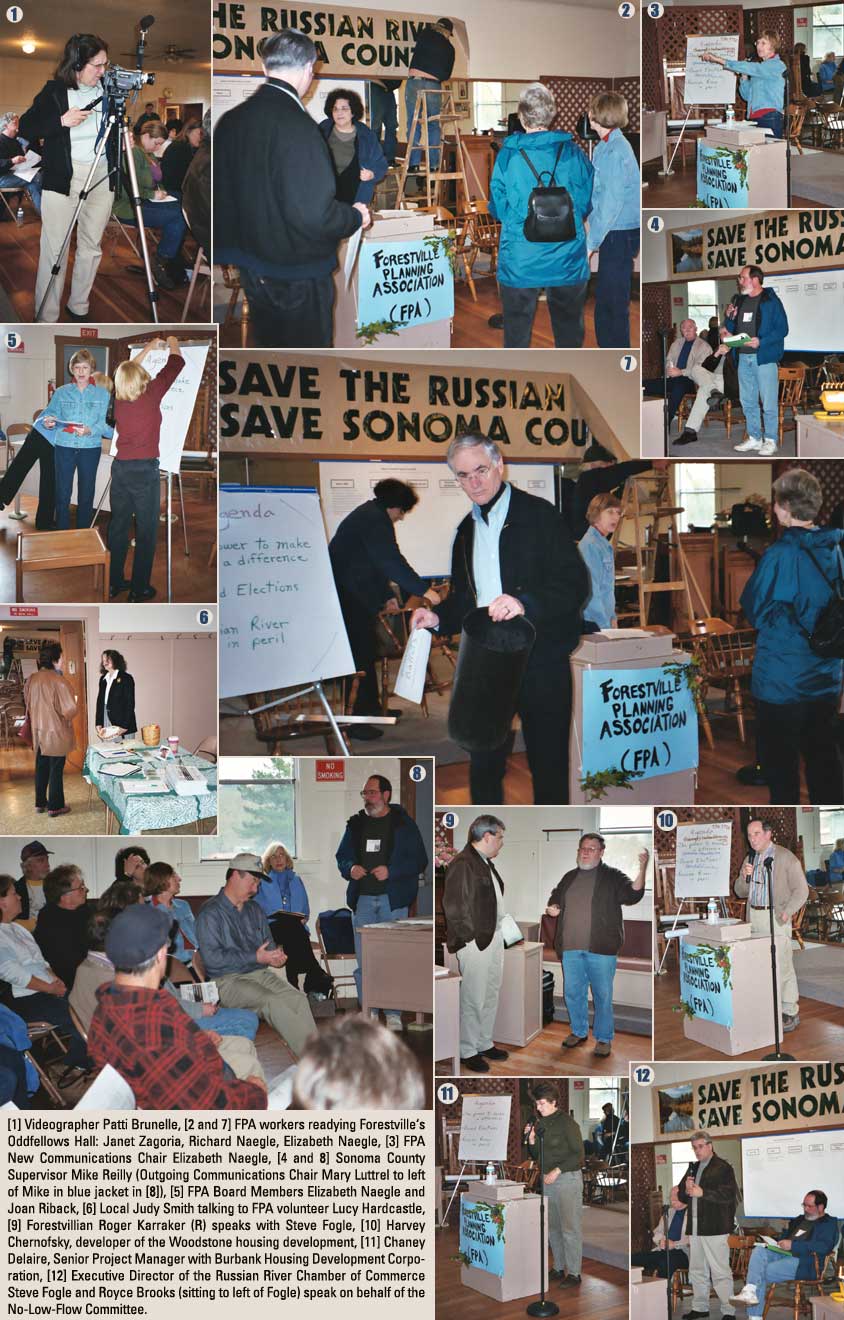