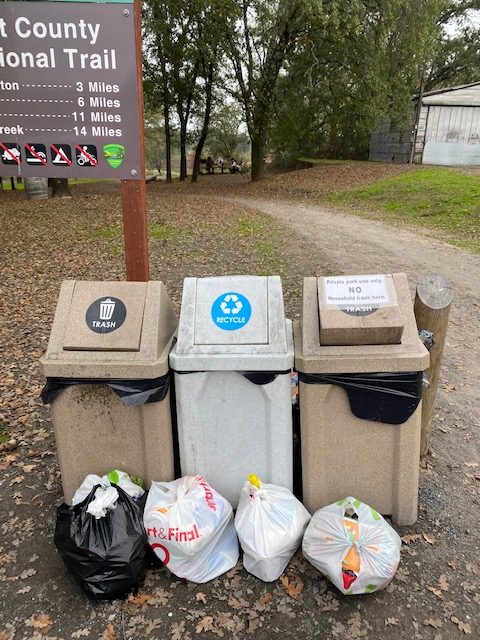 December 2021
by Lucy Hardcastle
“Doesn’t anyone care about how this place looks?” That statement was overheard one summer afternoon. They were referring to the overflowing trash cans at the entrance to the trail.

What most people don’t know is the FPA pays for trash pick-up twice a week, before and after the weekend. Under normal conditions, that is enough to keep the park looking great. However what we’ve been finding is several people have decided the park is the place to dump their household trash being either too lazy or broke to take care of their own garbage.

What Mario (our trash hauler) is finding when he lifts up the lids isn’t simply picnic remains, it’s stuff that’s been generated outside of the park, sometimes big items, expensive ones to take to the dump like a dilapidated camper shell left in the parking lot. More than once I’ve stopped people from leaving old suitcases, clothing, furniture, and the like.

Our downtown park is not the dump and shouldn’t be treated that way. If you see people abusing our trash cans, please inform them this is not a public park, and we don’t have the funding to handle their leftovers.

If this abuse continues, we will consider not having trash cans at all or purchasing large steel “bear proof” containers which make it impossible to stuff full garbage bags inside.

Handling trash abusers is one of the most challenging issues we face alongside people abandoning their old cars. It simply isn’t fair.