Summary of the March 30, 2022 Forestville Town Hall Meeting
(See a video of the entire meeting at the bottom of this page.)

by Lucy Hardcastle, President, FPA
After two long years having Town Halls only on Zoom, the agenda was packed. Elise Wieland who monitored the Zoom component reported 63 on Zoom and 100 came in person.

Display boards lined the room, everything from the history of the land where the downtown Oaks Park is now along with the current design elements for the future of the park. Transportation and Public Works had several large showing sidewalk and crosswalk plans for downtown with a sketch of a roundabout at Mirabel and River Road. Fire Safe had a large display table with fire safety information for the taking and Skatespot had their design graphics. Photo: Meeting site, Forestville Elementary School, Multi-Purpose Room/Gym. Many more people were on Zoom.

We heard first from Cyndi Foreman from the Sonoma County Fire District (snippet of presentation above) who had an excellent presentation on the challenges of small-town fire departments especially when it came to funding the equipment they need to address the increasing fire risk throughout the County. She added how consolidation of resources was the most effective way to provide services throughout our area. We need to be working smarter if we are to ever stay on top of the challenges rural communities face in combatting fire.

Amy Beliharz from Safer West County spoke of how successful community groups have been in Sonoma, Occidental, Guerneville and Camp Meeker within the Fire Safe umbrella. Being part of this larger endeavor allows smaller neighborhood groups to apply for grants that can help with fire mitigation efforts on a local level. They asked people to sign up to get more information and form a Fire Safe Forestville chapter. Fire is a common denominator we all fear and no town or neighborhood is alone in combatting those forces. Together we have a much better chance to avoid catastrophe. Photo: The town meeting was planned by the Forestville representatives to the Lower Russian River Municipal Advisory Council (LRRMAC) –  Lucy Hardcastle, Lisa Nahmanson and Vesta Copestakes (seen L-R to the right of the computer screen). The county managed online access – you can see Supervisor Lynda Hopkins’ Field Rep, Elise Wieland, operating the Zoom part of the meeting on the computer in the center. 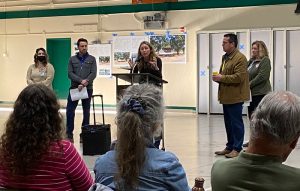 Transportation and Public Works Director Johannes Hoevertsz introduced his staff who have been working on the civil engineering component of putting in new sidewalks and crosswalks in downtown Forestville and down Mirabel Road. He fielded many questions from the audience on what we can expect with these improvements. Drawings were also provided for a roundabout at River Road and Mirabel. The roundabout is being considered as that intersection can become dangerous during the summer months with increased tourist traffic and speeding along River Road. The roundabout would act to slow traffic down to safer speeds and alleviate the backup of getting onto River Road when it’s busy.

Photo: Supervisor Lynda Hopkins steps in to clarify questions about the county’s additional involvement with the designs Director Johannes Hoevertsz [on right] and staff were answering about the draft plans, seen below.

Below drawings are of Public Works’ drafts for new sidewalks along Front Street and Covey Road. Click on the below images to view much larger. If necessary, pull your browser window wider to examine details. 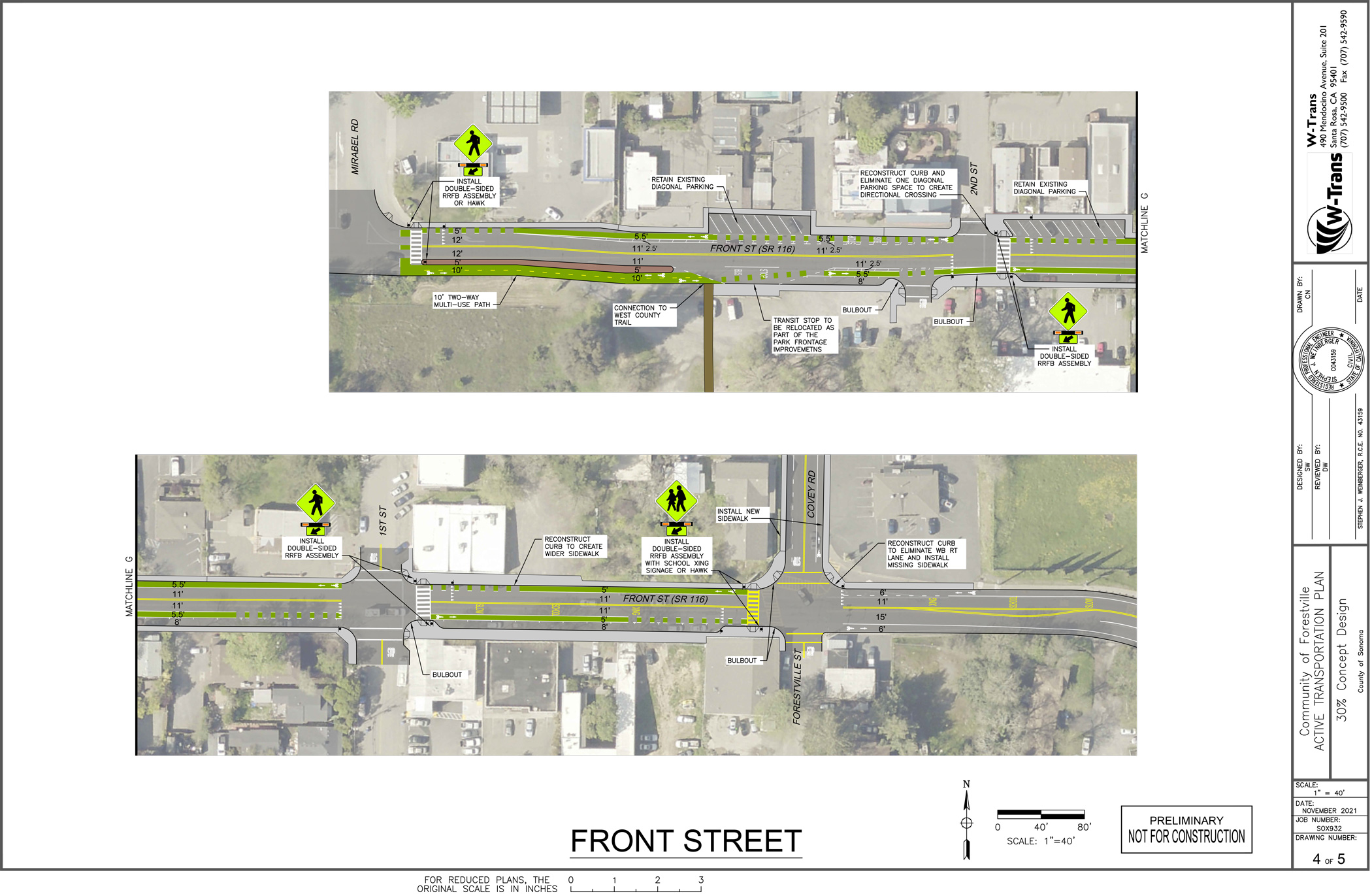 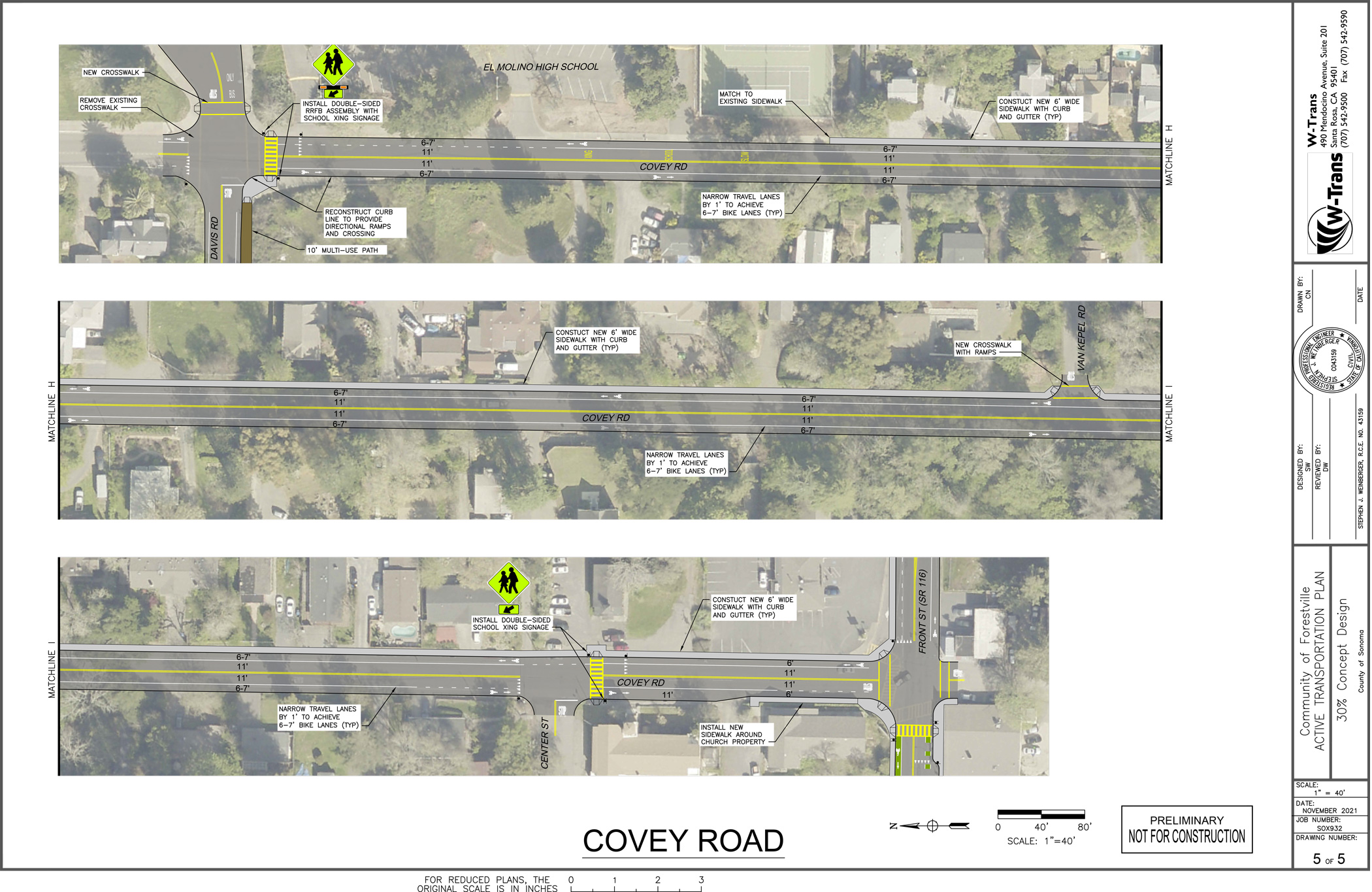 Below drawings are drafts from Public Works’ for potential redesigns of the intersections of River and Mirabel Roads and then of Mirabel and Trenton Roads. Click on the below images to view much larger. If necessary, pull your browser window wider to examine details. 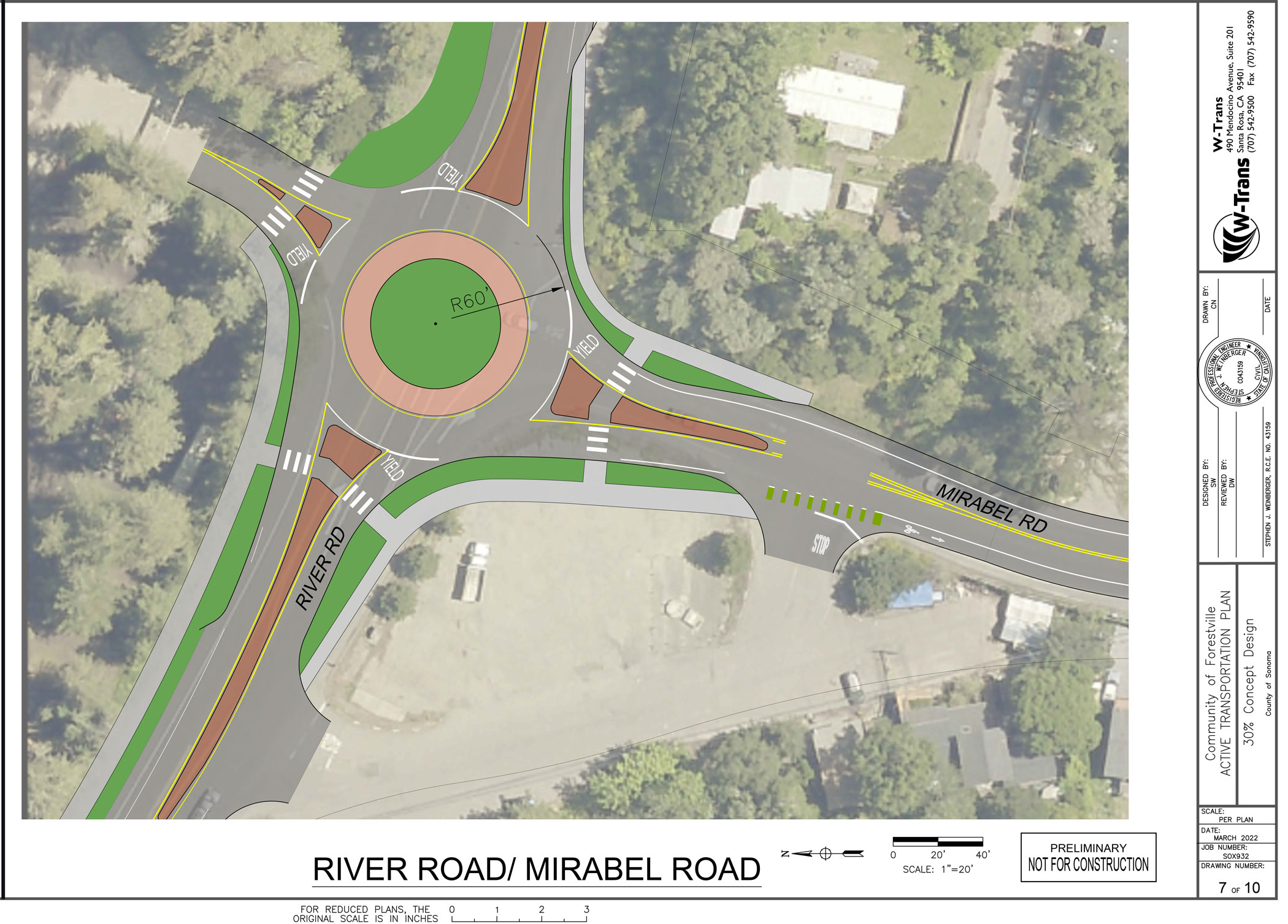 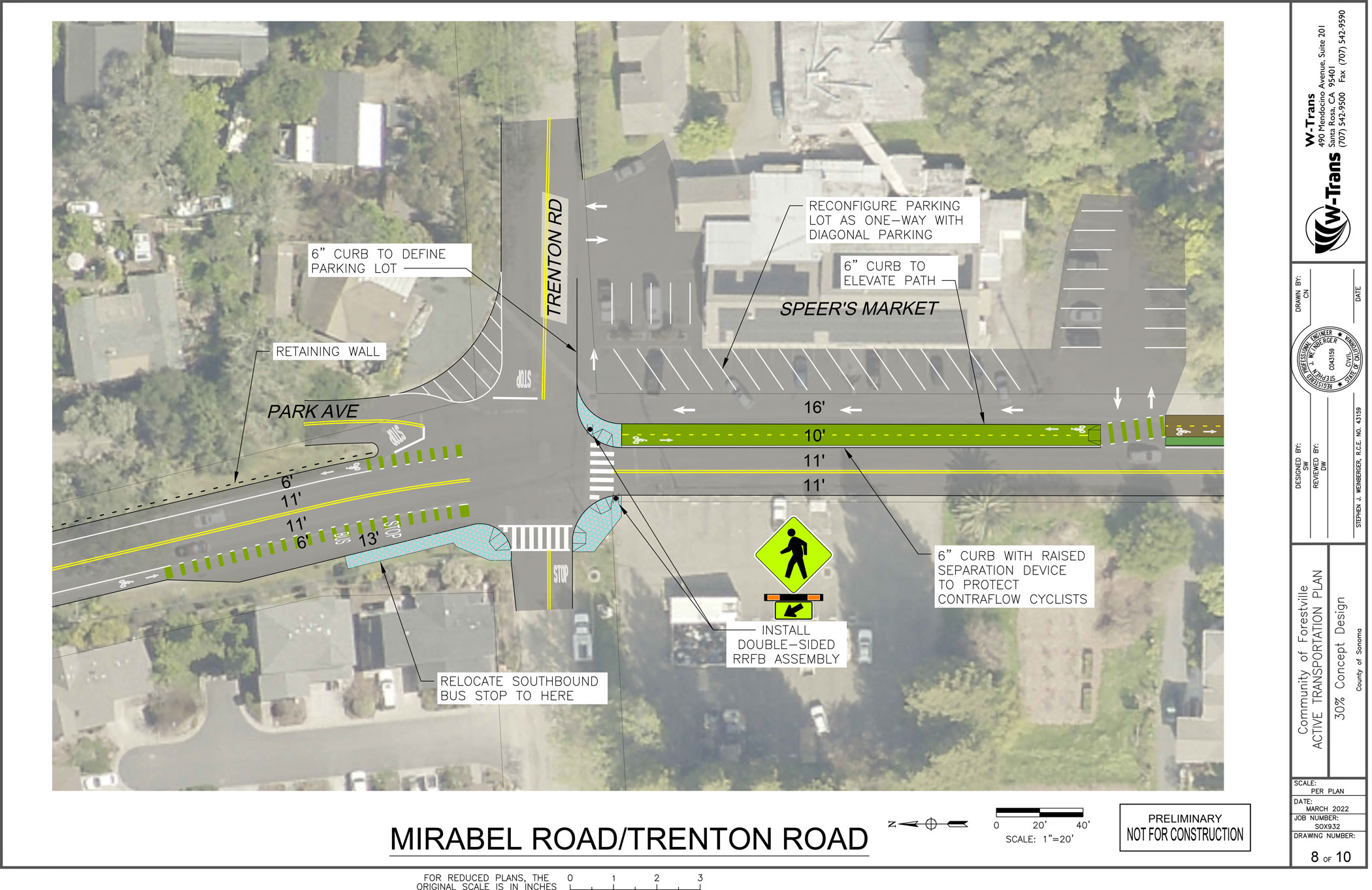 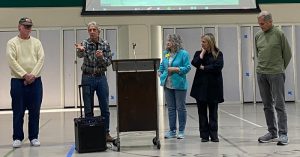 The FPA had a slide show explaining our establishment in 2002 and what we’ve accomplished in the past 20 years, most importantly the link to the West County Trail. We asked for folks to offer up their talents to assist us in handling our challenges and getting to our goals.

Photo: 5 of the current board members of the Forestville Planning Association. Wayne Gibb, Ken Smith Lucy Hardcastle, Joanie Blechel and Michael Cuoio. Ken Smith who is a retired architect and Michael Cuoio created the conceptual design for the downtown park. Go here for more details along with mock ups of future plans.

Jacque Brazieal introduced the representative from New Line Skateparks through zoom who explained the components of the two designs they are considering once the property is secured. Two teens spoke of what skateboarding meant to them and why it was important to have such a park for both young and old as not everyone is into team sports. It’s healthy exercise, gets kids outdoors and away from their screens and it’s a way to find companionship and connections.

Below are the 2 Forestville Skatespot’s design drafts. Click on the below images to view much larger. If necessary, pull your browser window wider to examine details. 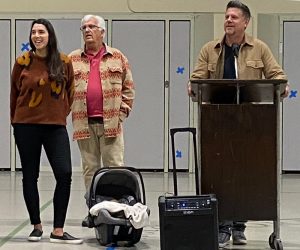 Amber Gray and Gary Harris from the Forestville Chamber of Commerce announced upcoming events such as the Easter Egg Hunt taking place Sunday, April 10 at the Youth Park. The Youth Park will have their BBQ after two years of hiatus. It will be the first weekend in June. That Saturday morning June 4 will be the annual parade as well as a kickoff to the BBQ. Gary asked for entries. The parade will be organized by the Chamber, who have taken on the Easter Egg hunt as well. Photo: Gary Harris, center, introduced several new businesses in Forestville. The other people in this photo are the owners of the new pizza restaurant in the center of town, opening soon.

Finally, Lynda Hopkins gave an update on all things County, talking more on how four years ago at a Town Hall she talked of the funds she discovered being collected from our local quarries and sitting waiting either for the Bypass or Roundabout. Inasmuch as those projects are unlikely to be developed, she did research and found out sidewalk and crosswalk improvement were top of the list of needs. It’s taken that long to get this project designed with fires, floods and the pandemic taking up so much bandwidth for the Board of Supervisors. Photo: One of many audience members asking smart questions throughout the meeting. At the Chamber table are Amber Gray and Gary Harris.

The meeting wrapped up at 7:30 but many stayed after to visit the presenter tables, sign up for information or to volunteer.

The below video is of the complete meeting.

Thanks to the Sonoma County Board of Supervisors for providing this video. (Pardon the blurriness of the speakers. Not sure what happened there but the important drawings were quite clear and can also be seen above.) You may have to turn up your audio. This video’s audio was better than being in the room which was a large, echoey space.