As many of you know, the downtown land acquisition has been a long process (starting in 2011) with many bumps in the road, and sometimes a roller coaster ride.

(To read about the FPA’s history, go to: FPA History.)

The following is a brief summary of the journey to the Town’s success.

Although the original goal was to acquire 8 acres for a downtown open space park, in the end we were successful in getting four protected acres which will preserve the oak grove and lower wetlands, allow for the completion of the West County trail and trailhead, and establish a Town Square — a comfortable outdoor place for Forestvillians to gather, to hold the Town’s traditional Holiday Tree lighting celebration, and to continue to provide overflow parking for downtown businesses. 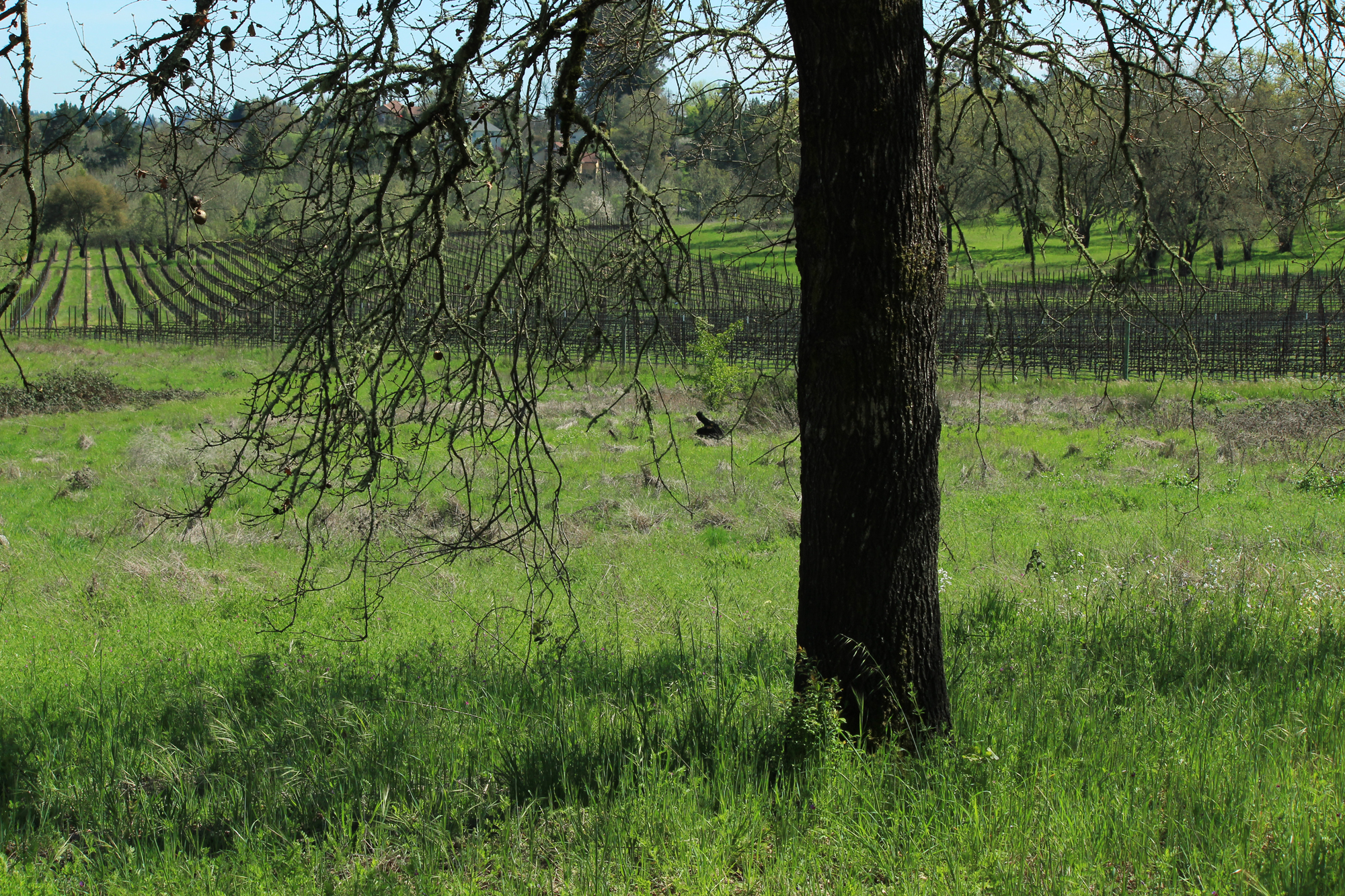 On the Property, facing south.

The Forestville Planning Association (FPA) Board believes this is a win/win situation for Forestville. We will have our large Downtown Park; we will also have some adjacent commercial development which will enhance the Town’s economic vitality as well as provide neighbors to the Park for safety and maintenance purposes.

The commercial area will make a bookend to the Park, making it more in the actual center of Town’s activities, which perhaps even will draw even more people to use the Park.

Over the years, the undeveloped 8 acres in downtown Forestville have seen plans for development come and go. Among the proposals were a golf course, high-density housing, and recently a proposal for multiple Townhouses, combined with a huge commercial development, and a Town Square.

None of these proposals moved forward primarily because the Town resisted any plan that would inhibit use of the Property by the community. The last plan garnered community support for one singular reason: developer Orrin Thiessen promised a Town Square.

The Property has been used for decades by the Town. It has been the place of community gatherings such as the Holiday Tree Lighting, Town Socials, Business Expos and even a Farmer’s Market.

It has also served us well as overflow parking for the restaurants and businesses in town. To lose access to the Property would be a tremendous blow to the very fabric of the community and its identity.

The FPA took on the project of buying the land with backing from the Sonoma County Agricultural Preservation and Open Space District.

At an FPA Town Meeting on June 27, 2012, all 75 participants endorsed the idea of an 8 acre Downtown Open Space Park and began brainstorming on how best the community might use the property. 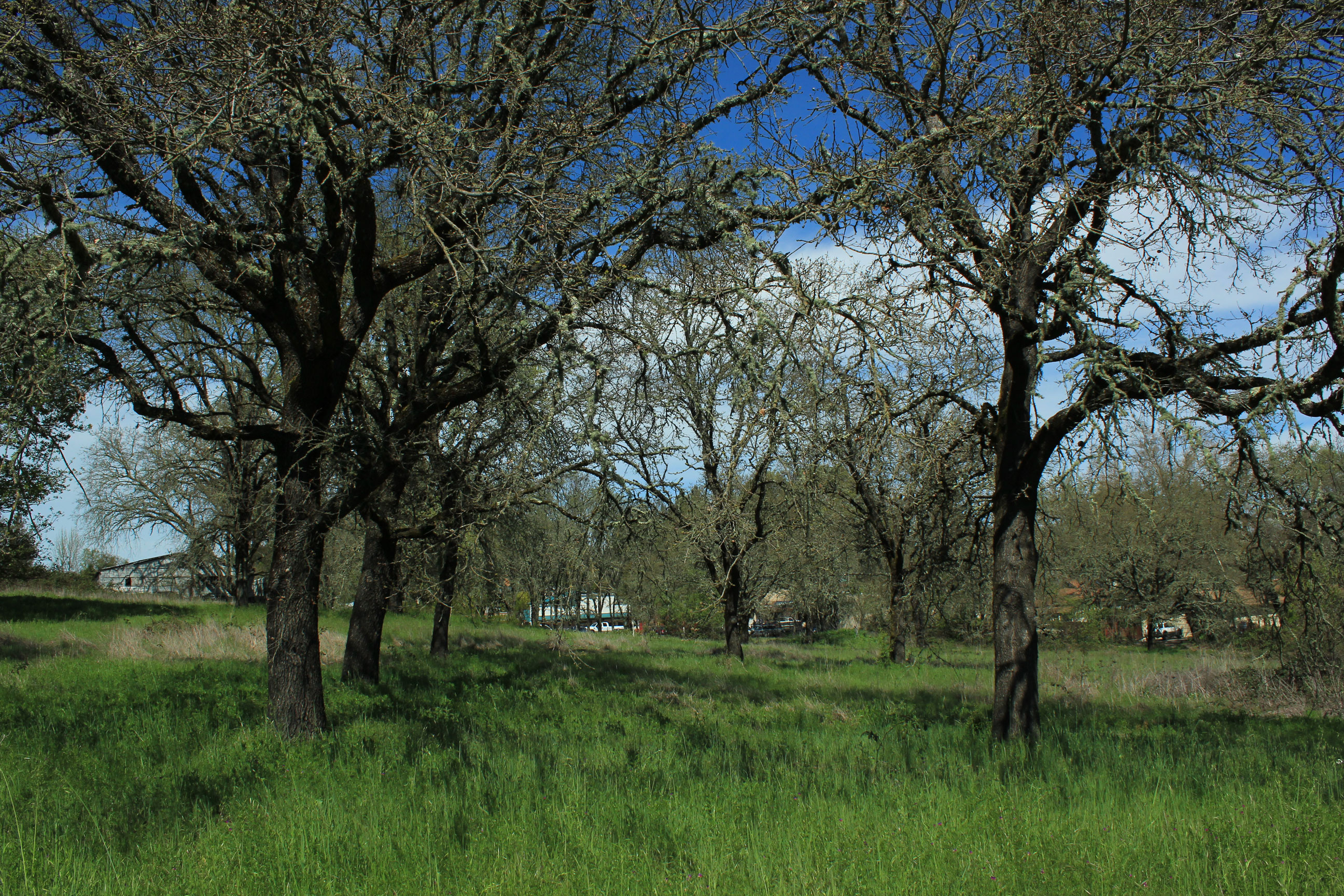 On the Property, facing north toward downtown.

The FPA then submitted a proposal to the County Open Space and Agricultural Preservation District. On September 18, 2012, the County Board of Supervisors approved a $750,000 matching grant for the Forestville Planning Association towards the acquisition of the 8 acres. (Numerous local supporters came to this meeting, all wearing white — including Supervisor Carrillo, to show approval of the park.)

Subsequently, through mass mailings, email alerts, public signs, and conversations with many local individuals and organizations, the FPA started a fund-raising effort to meet the County Match.

In May, 2013, the FPA held a Town Meeting to report that it was close to meeting the match. While many people there came forward with additional donations, a small contingent of people objected to how the project was originally conceived.

One of the main objections to the land acquisition was the opinion that a portion of the land should be used for commercial/mixed use. Although there was no specific plan offered, those objecting to the Open Space Park preferred the concept of commercial development.

Other objections were the fear that the Town could not support two parks (i.e. this new park + the Youth Park) and the perception that the FPA was pursuing this project behind closed doors. 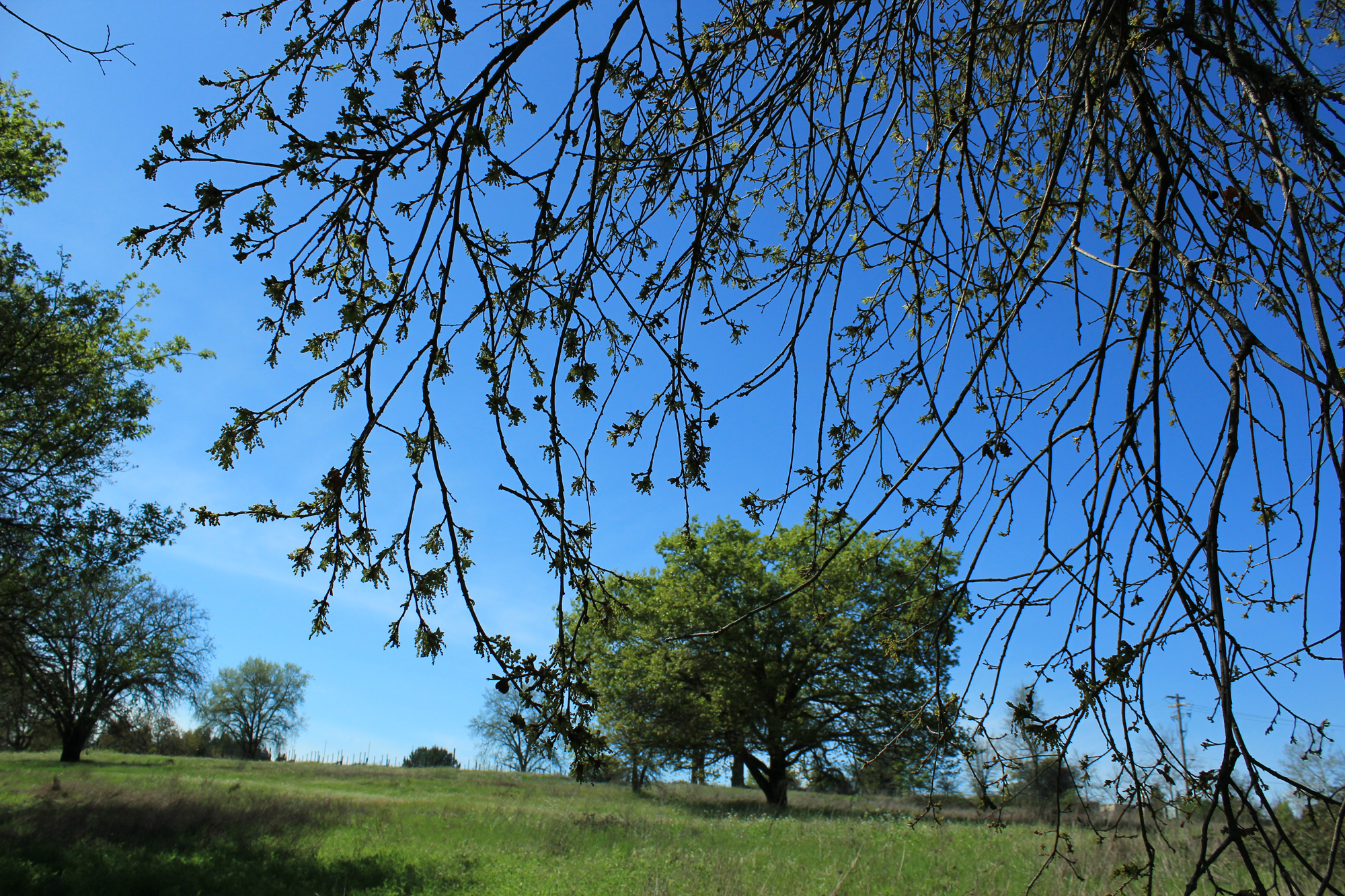 On the Property, facing west.

The final vote by the Sonoma County Board of Supervisors for the release of the Open Space funds had been scheduled for June 25, 2012. Because of the new and unexpected opposition, West County Supervisor Efren Carrillo pulled it from the board agenda. Since the property was already in escrow with Summit State Bank, an extension of escrow was required.

On June 26, Carrillo had a meeting with the FPA and 4 people who represented those objecting to the 8 acre open space project (the Forestville Locals Alliance – FLA).

Carrillo’s decision was for the FPA and the FLA to work out a compromise. Several meetings were held (under the good office of the Forestville Chamber of Commerce) and a compromise was reached.

Nevertheless, opposition continued, and the vote was still not brought to the Board of Supervisors. While Summit Bank had been patient with the process, they would not grant a further extension of escrow and the whole project was close to complete collapse.

In a final meeting called by Supervisor Carrillo, the FLA proposed a split of the property with a commercial partner — Catherine and Joe Bartolomei, owners of the Farmhouse Inn. With last minute scurrying, the FPA and the Bartolomeis were able to meet the escrow deadline and purchase the property.

On October 22, 2013, the Sonoma County Board of Supervisors voted to fund the purchase of land in downtown Forestville for Open Space, an extension of the West County Trail and development of a real Town Square. 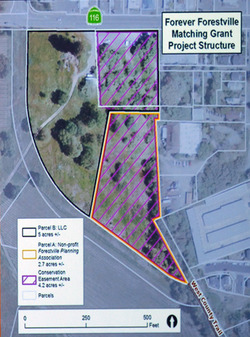 The final arrangement was for 4.2 acres (a combination of two parcels — see left) to fall under the Open Space agreement (a conservation easement in perpetuity for protected open space as well as for a Town Square, completion of the West County Trail and trailhead, + retention of downtown overflow parking).

The third parcel, 3.7 acres, can be used for commercial/mixed use development. The Bartholomeis, longtime Forestville residents, are very attuned to the Town’s needs and are eager to have the Town Square developed first before they design some tasteful commercial space that would blend with the Square.

The final papers were recorded on Friday, November 15, 2013.

Financing of Matching Grant and Purchase of Property:
On October 22, 2013, the Sonoma County Board of Supervisors funded the purchase of Downtown Open Space Park with the Open Space District’s Matching Grant. The final papers were recorded on Friday, November 15, 2013.

FPA needed to raise Cash and In-Kind contributions towards that match, which was successful.

The In-Kind contributions included the following:

The acquisition and fixed costs (cash) for the property are below.

NOTES
a) FPA was required to generate $400,300 in cash and in-kind donations for the Matching Grant. In-kind donations (including $395,000 from the county for completion, operation and maintenance of the West County Trail and a new bus stop) made up the difference between the cash raised and the $400,300.

b) The Commercial Group purchased the 1.5 acres of land the Town Square will occupy along with the its other 4 acres. They can commercially develop their 4 acres. The 1.5 acre Town Square land has a conservation easement which means there are Open Space restrictions on its development and it is guaranteed for public access and public use.

c) The Open Space Grant also paid for the conservation easement on the 1.5 acres of Town Square land.

d) If FPA had purchased the entire 8 acres, the closing costs would have been considerably higher and it would have been necessary to get a loan from the bank for $37,000 or more (depending on the amount of cash FPA could afford for the final payment at close).

Your further donations will support the development of the Park. You can donate Cash and/or In-Kind on our Downtown Park Donate page.

Cash donations are tax deductible; In-Kind donations may be tax-deductible – check with your tax preparer.

History of In-Kind and Cash contributions: